Do you have something to add?
A story of your own to share?
Contact me by e-mail saskhauntings@hotmail.com 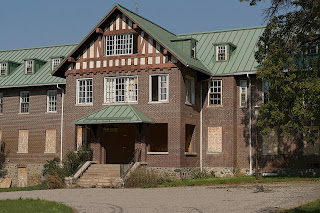 Before I tell you some of the tails at this old Sanitarium let me clear up some common misconceptions about Fort San...
Fort San was opened in 1917 when tuberculosis infections were increasing in the province and there was no cure. It was a self sufficient facility including a power house, gardens, livestock, housing for staff, library and more. People that lived at Fort San suffered daily, were isolated from society and could only wait to die. Many people suffered and died at this location including some staff.

When tuberculosis became less of a threat the province shut down the sanitariums. While most were demolished around the province Fort San was re-purposed, first for a summer school of the arts which ran until 1991. It was then a HMCS Qu'Appelle Cadet Summer Training Camp and then converted into a conference center. Echo Valley Conference Center, as it was know, was a government run facility which was based in the old historic sanitarium. The facility was run until 2004 at which time the government decided to close its doors and put it up for sale. The property was bought by a developer with the promise of turning the site into condominiums. Today it sits abandoned, being vandalized and destroyed by the elements. The nursing houses have been demolished and another building was burnt down. 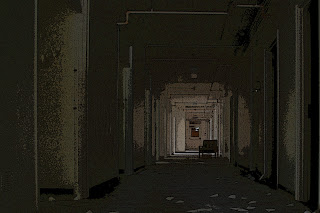 Now that you know the history of Fort San let me tell you about the other side of it. The building may be abandoned but it is anything but empty. This location is reported to me one of the most haunted places in Canada. Because of its rich and dark history it seems those who came here to die stayed around. There have been many accounts of paranormal activity in Fort San and investigations have been done.

The most common spirit seen is that of "Nurse Jane," a nurse who is seen moving form room to room down the hallways doing her job. She will not notice you but go about her business, dressed in a white uniform and small cap just doing her job, tending to those who are sick.

Other reports have been the sounds of wheelchairs and beds moving along the floor, footsteps down the halls, children's voices, cold spots, feelings of being watched, the spirit of a woman with a baby and the feeling of an evil presence. There have been so many experiences in this building it is no wonder that is it one of the most haunted places to visit. Each person seems to have a difference experience at this location whether seeing, feeling or being physically touched by a spirit you are bound to have an experience. With a range of residual spirits and intellectual spirits this location has a rich history that is clearly attached to the building.

Popular posts from this blog

June 01, 2012
There is a stone house located just off the Trans Canada highway about 3 miles east of Indian Head known as "the screaming house". This house can easily be identified because it's two windows facing the tracks have been closed off. This home was built by a family in the 1800's. According to the legend they say that one of the families children wandered onto the tracks and as the mother looked out the window she watched her child get killed by a passing train. The mother was so upset by this tragedy that her husband blocked  up the window's facing the tracks hoping to help cope with the event. It is said that the mother still relives this terrible tragedy and if stand in the downstairs room in the late evening when a train is going by on the tracks you can hear her screams. Of course this is just a local legend and no one knows what really happened for sure. But people continue to visit the home and some claim to feel the presence of a woman and children.
1 comment
Read more

April 15, 2013
McKim road is a lesser known haunting although not surprising. Saskatchewan is a large province and with so much space and rural areas, ghost towns and small settlements why do we not hear more about these hauntings? McKim road is a grid road halfway between Yorkton and Melville. I believe it may have once been a small town site or settlement according to the maps. Today not much remains.. or does it? As the story goes there was a man riding his motorcycle down the road and at an intersection he was hit by a grain truck and the man passed away. It has been said that if you park your car at the intersection at night you will see the light from a motorcycle travelling your way. Depending on the story it will turn off or keep going straight. If you follow it, the light will vanish. Some say if you do not follow it and keep the lights off your vehicle will shake, the light will vanish and your car will become dusty from the gravel and you will be able to see hand prints on the dash.
1 comment
Read more